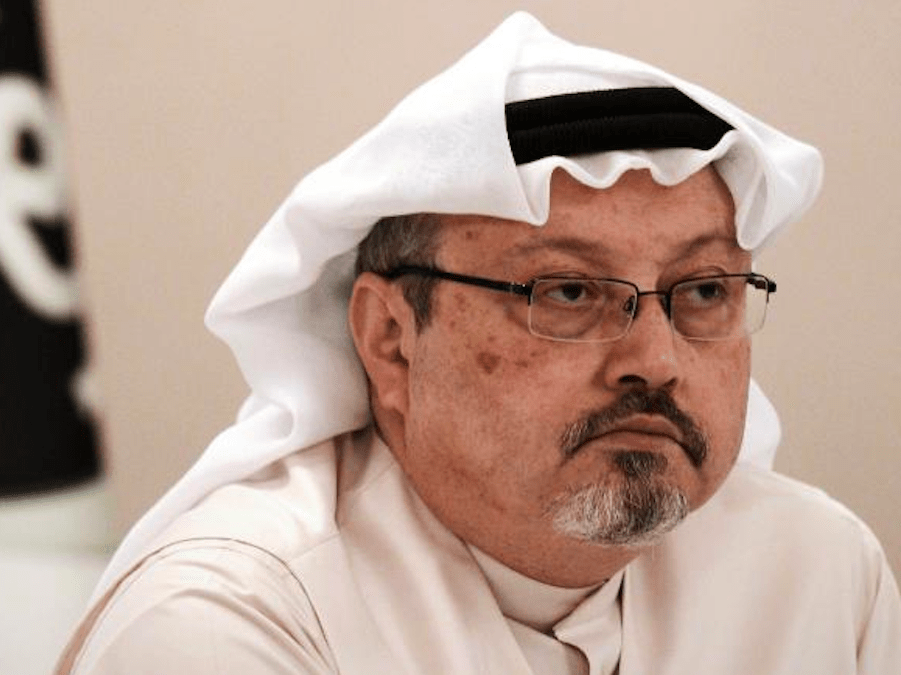 President Donald Trump has defended Saudi Arabia as accusations mount over its de facto ruler’s close links to the men who apparently killed a journalist in the kingdom’s consulate in Istanbul.

Saudi Arabia has come under intense international pressure to explain Washington Post columnist Jamal Khashoggi’s disappearance after he visited the consulate on October 2 to obtain papers that would have allowed him to marry his Turkish fiancée.

The disappearance of Khashoggi, an insider-turned-critic of the Saudi government, has prompted international outrage and calls for punitive action against Saudi Arabia.

It has also thrown Trump’s close ties with the kingdom into the spotlight as Secretary of State Mike Pompeo is engaged on a tough diplomatic mission to contain the crisis.

On Tuesday sources told CNN that a group of Saudi men, whom Turkish officials believe are connected to Khashoggi’s possible death, was led by a high-ranking intelligence officer, with one source saying he was close to the inner circle of the Kingdom’s Crown Prince Mohammed bin Salman.

Trump suggested in an interview on Tuesday that the wave of criticism the Middle Eastern kingdom has faced over Khashoggi’s disappearance is premature, comparing the case to sexual assault allegations against recently confirmed Supreme Court Justice Brett Kavanaugh.

“Here we go again with you know you’re guilty until proven innocent,” Trump told The Associated Press in an interview at the White House.

“I don’t like that,” he added. “We just went through that with Justice Kavanaugh, and he was innocent all the way.”

Later during an interview with Fox, he said that if Saudi Arabia knows what happened to Khashoggi, “that would be bad.”

Despite Trump’s caution, Washington’s “working assumption” is that Khashoggi was killed inside the consulate, a US official previously told CNN.

On Tuesday, G7 foreign ministers from Canada, France, Germany, Italy, Japan, UK and the US, plus the high representative of the European Union, urged Saudi Arabia to conduct a “thorough, credible, transparent, and prompt investigation.”

“Those bearing responsibility for his disappearance must be held to account,” they added in a statement.

Pompeo will arrive in Ankara, Turkey, on Wednesday to meet with Turkish President Recep Tayyip Erdogan. He visited Saudi Arabia on Tuesday where he held talks with King Salman and the crown prince, who he said “strongly denied” any knowledge of what happened to Khashoggi.

“My assessment from these meetings is that there is serious commitment to determine all the facts and ensure accountability, including accountability for Saudi Arabia’s senior leaders or senior officials,” Pompeo said Tuesday after meeting.

Turkish authorities believe 15 Saudi men who arrived in Istanbul on October 2 were connected to Khashoggi’s possible death. At least some of them appear to have high-level connections in the Saudi government.

Turkish officials have told CNN that Khashoggi’s body was dismembered after he was killed in the consulate.

Several US officials have told CNN that any such operation could not have happened without the crown prince’s direct knowledge.

Previously, a source familiar with the ongoing investigation told CNN that Turkish authorities have audio and visual evidence that showed Khashoggi was killed inside the Saudi consulate. The evidence, which was described to the source by a Western intelligence agency, showed there had been an assault and a struggle inside the consulate. There is also evidence of the moment that Khashoggi was killed, the source said.

The crisis has created a diplomatic rift between Saudi Arabia and the West and led to international firms pulling out of a high-profile summit in Riyadh. The CEOs of three top banks — Standard Chartered, HSBC and Credit Suisse — announced their withdrawal from the conference Tuesday.

International Monetary Fund Managing Director Christine Lagarde was the latest senior invitee to pull out, according to a Tuesday statement.

Prominent Republican lawmakers on Tuesday forcefully demanded answers and retaliatory action over the disappearance, with Senator Lindsey Graham threatening to “sanction the hell” out of Saudi Arabia.

President Trump has been reluctant to castigate the kingdom, a key US ally that plays a central role in his administration’s Middle East policy, despite growing pressure at home and internationally.

Trump and his son-in-law, Jared Kushner, have also developed personal and business relationships with the Saudis.

Kushner has developed close links with the crown prince, whose attempts to foster an image as a reformer may be fatally damaged by the crisis.

The prince’s reputation has already been tarnished by the detention of Lebanon’s prime minister, the war in Yemen, his arrest of large numbers of Saudi’s elite, and the campaign against Qatar, as well as the imprisonment of activists.

In an interview with CBS’ “60 Minutes,” Trump bristled at the idea of cutting weapons sales to Saudi Arabia, and in comments on Monday, he touted a denial from the Saudi King and offered up the idea that “rogue killers” may have been involved.

Trump’s comments may be a sign that Washington is preparing to accept Saudi Arabia’s efforts to distance its leaders from whatever fate befell Khashoggi.

Sources have told CNN that the kingdom was preparing a report to acknowledge that Khashoggi died at the consulate in Istanbul in an interrogation that went awry. The sources said the interrogation was intended to lead to his enforced return to Saudi Arabia.

One source said the report will likely conclude that the operation was carried out without clearance and transparency and that those involved will be held responsible.

Saudi authorities had previously maintained Khashoggi left the consulate the same afternoon of his visit, but they provided no evidence to support the claim.

However, an admission that Khashoggi died in the consulate is not likely to deter difficult questions over the whereabouts of his remains and the movements of the 15 men and their links to the crown prince.

Three sources familiar with the case told CNN that the high-ranking officer who was close to the crown prince’s inner circle and led the group of men to Istanbul came from the General Intelligence Presidency, Saudi Arabia’s main intelligence service. One source said the officer assembled and sent his own team to interrogate Khashoggi.

Turkish officials provided CNN with passport scans of seven men they say suspect to have been part of the Saudi team. The passport scans were taken on the day of Khashoggi’s disappearance.

One of the passport scans appears to belong to Salah Muhammad al-Tubaiqi, listed as the head of forensic medicine at the Saudi Ministry of Interior. Another member of the group identified by Turkish official media and appearing in the alleged passport scans is Muhammad Saad al-Zahrani, who has appeared on Saudi state TV alongside the Crown Prince.

If that group is to be characterized as part of a rogue operation intended to bring Khashoggi back to Saudi Arabia alive, questions could arise about al-Tubaiqi.

If the autopsy specialist left Saudi Arabia for Istanbul before Khashoggi entered the consulate, as Turkish sources have asserted, it might be hard to square with the explanation that any killing was the result of a botched interrogation, and not premeditated.

Questions have also been raised by Turkish authorities over Saudi Arabia’s lack of cooperation in investigating the disappearance.

By the time Turkish investigators gained access to the consulate Monday evening, a fresh coat of paint had been applied “everywhere” inside the building, a Turkish official told CNN Tuesday. The source said Saudi Arabia must make “a genuine contribution” to the investigation of Khashoggi’s disappearance in Istanbul.

Earlier Tuesday, Erdogan suggested investigators were looking into possibility that evidence of toxic materials had been concealed.

“My hope is that we can reach conclusions that will give us a reasonable opinion as soon as possible, because the investigation is looking into many things such as toxic materials and those materials being removed by painting them over,” Erdogan told reporters.

Previous Story
Canada just legalized recreational pot. Here’s what you need to know
Next Story
Operators of duck boat that sank, killed 17 are citing law from the 1850s to limit their liability