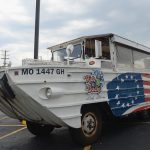 Citing a maritime law from the 1850s, the companies that operated a duck boat that sank during a fierce storm in July, killing 17 people, have filed paperwork asking a federal court to rule they have little or no liability for the incident.

The companies said the legal maneuver, filed in Missouri, will consolidate the civil actions against them and they plan to mediate settlements with survivors and families of the victims.

But one woman who survived the sinking as nine of her family members perished said the court filing finding her relatives “worthless is incredibly hurtful and insensitive.”

Ripley Entertainment, which operates Branson Duck Vehicles, says in its court complaint filed Monday that an 1851 law limits its liability because the amphibious vessel was properly maintained and prepared for the voyage and after the sinking it is a total loss.

“Except as provided in section 30506 of this title, the liability of the owner of a vessel for any claim, debt, or liability described in subsection (b) shall not exceed the value of the vessel and pending freight,” the law says.

A Ride the Ducks Branson vessel capsized and sank July 19 on a lake near Branson, Missouri, as a severe thunderstorm whipped up intense winds and waves. Seventeen people, aged 1 to 76, drowned, including one crew member.

Nine of the victims were members of Tia Coleman’s family. Tia Coleman, who is from Indianapolis, Indiana, and her nephew survived.

“Anyone who cares about people or has any human decency should boycott Ripley and their attractions,” she said Tuesday.

Ripley issued a statement that said it has been doing everything it could for the 14 survivors and the relatives of the deceased. The legal action is common in maritime disasters, the company said. Settlement talks will still take place, a spokeswoman said.

“We have reached out to those most impacted by the accident and offered to mediate their claims now,” public relations manager Suzanne Smagala-Potts said. She said lawyers have scheduled mediation hearings or will do so.

One of Coleman’s attorneys disputed that they have talked settlements.

“Ripley’s claim that the lives of the family members they killed with their outrageous and criminal conduct are worthless is yet another insult to these grieving family members from the Ripley’s organization,” attorney Robert J. Mongeluzzi said. “Let us be clear, there have been no offers of settlement. None.”

He predicted a federal judge will dismiss the complaint.

“Ripley’s inhuman legal ploy will sink as fast as their death trap duck boat did,” he said. “We will legally and factually demolish this frivolous claim.”

Duck boats are amphibious vessels that travel on both land and water, and are popular among tourists in major cities. The boats’ history dates to World War II, when such vessels were a common sight because of their versatility.

Tia Coleman filed a wrongful death lawsuit in September on behalf of her late husband and three children.

Earlier, the administrators of the estates of two other members of the Coleman family who died filed a wrongful death lawsuit seeking $100 million in damages from the companies.

An attorney representing the victims’ estates said the boat’s canopy entrapped the passengers and dragged them to the bottom of the lake.

The passengers might have survived, the attorney said, if the Branson operators had not ignored a 2002 National Transportation Safety Board recommendation that all duck boat canopies should be removed.

There are also a federal criminal investigation into the deadly sinking and a criminal probe by Missouri’s attorney general.

The National Transportation Safety Board is investigating the cause of the sinking.