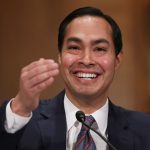 “I’m likely to do it. I have a strong vision for the country. I believe that our country’s going in the wrong direction and that it needs new leadership. I’ll make a final decision after November, but I’m inclined to do it,” Castro said in an interview published by Rolling Stone on Tuesday.

Castro, who was the secretary of housing and urban development during the Obama administration, has stoked speculation about his presidential ambitions in a series of public comments and with increasingly frequent travel to presidential primary states. He had been rumored to be a contender for the vice presidential spot on the 2016 Democratic ticket.

Over the weekend, the Texas Democrat was in Iowa campaigning for J.D. Scholten, a candidate for Iowa’s 4th Congressional District. It was Castro’s second trip to the state since August

“You know, I have to say, I felt at home coming in, walking in,” Castro told a crowd at the event. In late July, Castro’s twin brother, Democratic Rep. Joaquin Castro of Texas, told CBS that his brother has “definitely thought about it,” referring to a presidential bid.

Speaking to Rolling Stone, Julian Castro expressed some hesitation about a 2020 bid, citing his family, but he also began articulating the basis of a run.

He was also asked about a potentially bruising Democratic primary fight amid signs that key contenders like Joe Biden and Elizabeth Warren are preparing to declare their own presidential ambitions.

“It’s going to be cathartic for the party to go through a process where everybody gets to show what they’ve got. Where you have debates with over a dozen people and every wing of the party is represented,” Castro said.

He continued, “We need to go through that to get over 2016, and we’re going to come out of the 2020 primary, I’m convinced, in a much stronger position. The nominee will be stronger for it and be better prepared to win in November of 2020. I’m hopeful, and I think realistically hopeful, about what this very contested, long, drawn-out process is going to mean. Most of the time a party wants to avoid that kind of process, but in this case, that’s our salvation.”

Castro also sought to answer what was “missing” from Democratic messaging in the Trump era.

“I’m convinced that people need to know what your plan is to make things better for them and their family in a way that reflects the times that we live in, when people are worried about losing their job to automation or worried about the impact of this erratic trade war that Donald Trump is engaged in, worried about the escalating cost of going to college,” he answered.