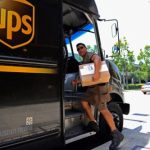 The holiday season is right around the corner, which means companies in the retail, service and shipping industries will start to add a slew of temporary jobs to support the increase in business over the next few months.

In fact, just last week, UPS announced that it plans to hire about 100,000 seasonal staffers to help handle the expected uptick in deliveries during the holiday rush. The global logistics company anticipates its package volume will start to increase beginning in November and carry on through January.

“Every year, we deliver the holidays for millions of customers,” UPS Chief Operating Officer Jim Barber said in a press release. “In order to make that happen, we also deliver thousands of great seasonal jobs at our facilities across the country.”

As part of its seasonal hiring spree, UPS will offer temporary full- and part-time positions with flexible shifts at thousands of locations across the United States, including permanent package hubs and temporary seasonal facilities. The Georgia-based company is mostly in need of package handlers, drivers and driver-helpers during that hectic three-month period.

If you’re looking for a job that will last past the holiday rush, temporary workers hired by UPS also have the opportunity to transition into permanent employment once the season is over. UPS reports that 35 percent of people hired as seasonal package handlers in recent years later became permanent workers with the delivery service.

Permanent full- and part-time job benefits include health care, retirement options and tuition assistance up to $25,000.

“I never intended UPS to be a career,” Kevin Whitehill, a UPS on-road supervisor who started as a seasonal part-time package handler in 1996, said in a press release. “I took a job for Christmas. As I moved along, the opportunities were just too good to pass up.”

This story originally appeared on Simplemost. Checkout Simplemost for other great tips and ideas to make the most out of life.