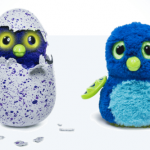 Now that the calendar officially says it’s fall, we know a few things are inevitable. The leaves will change, we will sip pumpkin spice lattes and we’ll start seeing Christmas decorations in stores before Halloween.

If you’re a parent, you know that this is also the season when holiday toy guides begin to emerge and your kids start to dream of what they’ll be putting on their wish lists.

One of the hottest toys for the last two years, Hatchimals, has just announced a new addition to its family: HatchiBabies. You can be sure it will be showing up on a lot of lists, and please accept our condolences to your wallet in advance.

HatchiBabies are basically the same thing as Hatchimals, but while Hatchimals go from baby to toddler and then grow up, HatchiBabies will always be babies.

The HatchiBabies are hidden inside colorful, speckled eggs and you will not know if you have a boy or girl until they hatch. Once hatched, there are also secret compartments inside the egg.

Just like the original Hatchimals, kids must interact with the eggs for them to hatch, as the eggs feature touch technology.

Despite their popularity, the Hatchimal toys have had mixed reviews, with some people saying their children only enjoyed them for a few hours and certain young critics finding them “kind of annoying” and not fun after they hatch.

Many parents, however, give Hatchimals rave reviews and say their children loved them. Most Hatchimals have four-star ratings (or thereabouts) on Amazon.

Will you be purchasing the new HatchiBabies this holiday season?

We were not paid to write this story. The products and services mentioned below were selected independent of sales and advertising. However, Simplemost may receive a small commission from the purchase of any products or services through an affiliate link to the retailer’s website.

This story originally appeared on Simplemost. Checkout Simplemost for other great tips and ideas to make the most out of life.