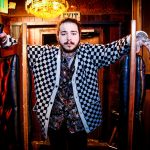 I’ve been following Post Malone for a while and I’m super excited that his new album is about to drop. Not only are we getting his album, but he just dropped this documentary.