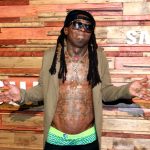 “We’ve obtained the results of Weezy’s paternity test, which he took to prove if he was Keiotia Watson’s baby daddy. Turns out, he absolutely didn’t father her 16-year-old son, Dwayne Brown.”

“I do not believe it is possible that I am the biological father of Dwayne Brown,” Wayne Said in a statement. “I have never acknowledged Dwayne Brown as my son, nor was I ever made aware of his birth until I was served with the petition… I am the loving father of four children, all of whom I provided support for since birth. Up until now, I have never been involved in a child support case.”

In 2015, a judge ruled in favor of Watson, ordering Weezy to pay $5,000 a month in child support, and any medical expenses, but the rapper never paid a dime.

The paternity test results were obtained by TMZ and according to an April 11 report, there is zero percent chance that Weezy is the father.

Previous Story
Solo: A Star Wars Story
Next Story
Nicki Minaj gets emotional talking how Cardi B hurt her