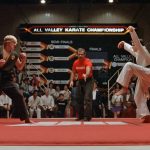 Daniel LaRusso and Johnny Lawrence are still in a rivalry three decades after the 1984 All Valley Karate Tournament of the original film. Ralph Macchio and William Zabka will both reprise their roles in this Youtube Red 10 episode special.

“Cobra Kai​ will be a true continuation of the original films — packed with comedy, heart and thrilling fight scenes and will be written and produced by Hot Tub Time Machine’s Josh Heald alongside Jon Hurwitz and Hayden Schlossberg of Harold and Kumar.

The Karate Kid: Cobra Kai is set to premiere sometime later this year..