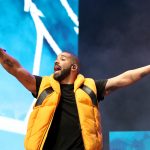 Drake is out here creating a lot of smiles in Miami

The Miami Herald reports that Drake gave $25,000 to Miami Senior High School after performing in a crane above the school’s baseball field while shooting a video for his new hit record ‘Gods Plan’

After that, The Miami Hurricane reports, he went to the University of Miami and granted a $50,000 scholarship to a student.

He then visited the University of Miami where he donated a $50K scholarship to a random student who just so happened to be Destiny James of Denmark, South Carolina #GodsPlan pic.twitter.com/4nZiQQEnlD

Drake didn’t stop there. He also visited a Miami supermarket where he jumped on the intercom and told all of the shoppers he would buy all of their groceries, according to E! News, coming to a total of $50,000.

A real king when out and paid for everyone’s groceries in the store, all the while encouraging people to buy more lol. BE GOOD AND IT’LL COME RIGHT BACK AROUND!!! so much love and bless this man 100 times over for all his generosity

Finally, he gave another $50,000 away to the city’s Lotus House Women’s Shelter

Part of the surprise from @champagnepapi included… • With this donation, we are going to be able to serve so many meals. Did you know that $10 a day serves 3 meals at Lotus House?! This year- we will serve 500,000 meals in our new Lotus Village kitchen

Why is Drake donating so much money in Miami? It may be part of ‘God’s Plan’