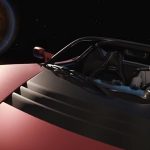 (CNN Money) — SpaceX’s Falcon Heavy took flight Tuesday, and everything appears to be going seamlessly. SpaceX has shaken up the rocket industry by becoming the first company to successfully reuse rocket boosters in order to bring down the cost of spaceflight. To do that, it guides the rockets back to Earth for a safe landing after sending their payloads toward orbit.

So that’s cool, but the fact that Elon Musk sent one of his personal $100,000 Tesla’s into space blasting David Bowie is even cooler.  You can watch the launch below

You can also live stream Starman flying through space

Also via: The Telegraph