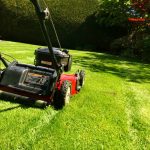 Life for most high schoolers doesn’t include managing a lucrative business, but it does for successful entrepreneurs RJ Duarte and Owen Johnson.

RJ, a 17-year-old senior from Golden, Colorado, began mowing lawns as a kid and decided to team up with Owen, then his middle-school classmate, to help with his growing roster of clients.

It began in 2008 when RJ’s older brother gave him a lawn mower, along with a red wagon and a list of five clients who wanted their grass cut weekly. He took a quick liking to his new opportunity and began acquiring more clients right away.

“I found something that I enjoyed doing,” RJ recently told Moneyish. “It might sound weird, but mowing lawns when you’re little is kind of fun.”

Fast forward to 2018, he’s balancing school, college visits and running his company, Green Worx Landscaping, which is on track to pull in more than $100,000 this year. Green Worx offers lawn care, cleanups, snow removal and more. RJ and Owen’s company employs crews of their fellow classmates, whom they pay $10 an hour, which is higher than Colorado’s minimum wage. The company’s biggest client? A waterpark and golf course where they’ve planted thousands of flowers.

Along with help from their parents, a mentor in the local business community and a supportive network, the pair have managed to improve Green Worx year after year. It’s no easy feat for teenagers who are still in school. During the academic year, the two are known to be up as early as 2:30 a.m. to maximize work time before the school day even begins.

RJ has already been recognized for his business savvy. In 2015 he won a $1,000 prize for young entrepreneurs through Young Americans Bank, a unique bank designed for kids and teens, located in Denver.

“This kid has the drive, it’s like nothing I’ve ever seen in my life,” RJ’s mother Tamara Duarte told Moneyish. “Once he puts his mind on something, he’s locked on.” With Duarte succeeding in school, while growing his business, she couldn’t be more proud.